World of Wonder returns to the 80’s! Just because Wonder Woman 1984 was delayed again, it doesn’t mean we can’t experience some of that 80’s magic anyway. Join us in continuing the story of Wonder Woman that George Pérez kicked off.

One thing we already know, it’s going to look great.

Definitely. I will still miss George Pérez doing the interiors though.

I spoke too soon, I thought it was still Perez. I’ve downloaded, need to start reading

Firstly, thanks for joining in the discussion this go-round!

You get to see Hippolyta go thru the different emotions as a parent. You see her worry about Diana, get mad when Diana didn’t do as she was told and you get to see her teach Diana that her inactions had consequences. They may be Amazons, but being a parent never changes.

I appreciate how that was depicted because of exactly what you mentioned. All of the differing emotions that were showcased were relatable. It’s easy for people to write off the Amazons as characters that you can’t relate to, but this story is proof that that is not always the case.

The Egyptian Amazons are an interesting twist. That being said, I’m not a fan. I enjoy the thought of Thymescara being unique and having these other Amazon’s takes away from that. At the same time it is understandable that somewhere along the line there would become a splinter group from the originals.

You know, I had never thought of that. I suppose it’s like how I feel whenever there are Kryptonian civilizations that survived through outposts or being bottled up. For some reason, I like it with the Amazons. I guess because they’re still on the same planet and it happened over centuries. I do understand what you mean. I guess it also helps me be okay with it since Golden Age Amazons were always saying “Hola!” and making mention to Spanish terms, so I figured there had to be Amazons going into the world beyond the shores of Themyscira.

Seeing Hermes trying to fit in fashionwise was comical!

Those fashion-fit-in scenes never fail to lighten the mood.

I loved Miami Vice! My dad had a boxset of season 1 and I watched it all over a weekend. I still remember THIS scene. For some reason, I really liked it. I thought it was so cool. The car, the song, the cinematography… Anyway, me going on a Miami Vice tangent

I loved Miami Vice! My dad had a boxset of season 1 and I watched it all over a weekend. I still remember THIS scene. For some reason, I really liked it. I thought it was so cool. The car, the song, the cinematography… Anyway, me going on a Miami Vice tangent

He was great, but my favorite was Larry Zito.

Though we didn’t get any Wonder Woman in the “present” in #32 it may have been may favorite of the three because of the Hippolyta/Diana story. At first, I wasn’t sure what I thought of Diana purposely missing the stag. She comes from a society in a different time, so hunting would be natural, but she is very compassionate so I don’t know. But, I liked the purpose of the story about teaching Diana duty and doing what needs to be done, even if it’s not easy. Then the boar! I had to laugh at the poor wild piggy, can not catch a break.

I’m interested in Etta’s story too. She’s in a no-win with her new boss. Want to see where this goes. Small note about little things that bug me. You only salute or wear your cover (headgear) indoors under very specific situations, this is not one of them. 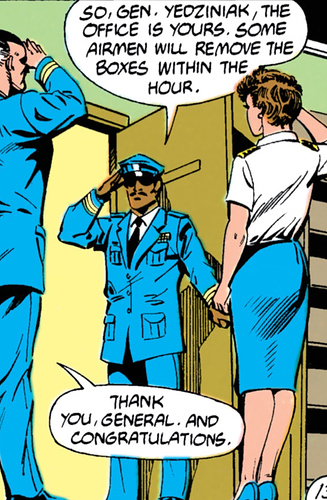 Hermes was a highlight. 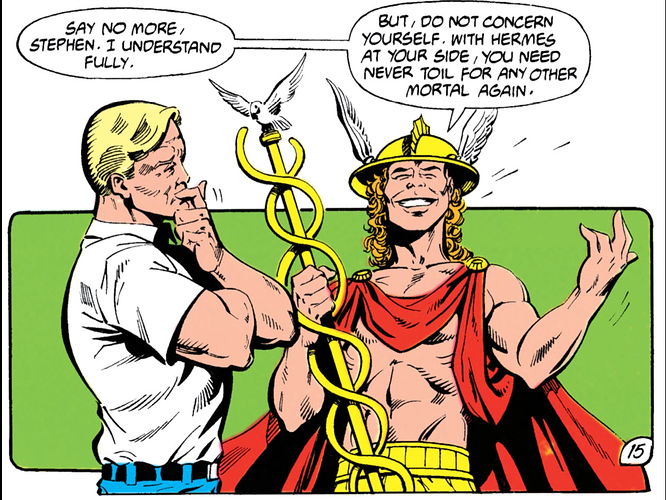 The Egyptian Amazons are making for a good story (though the subpar art on 33 hurts). It’s definitely are more barbaric tribe because of the situation they find themselves in. This is pretty rough scene. The final issue does finish off with a first class fight, have to see who’s behind that mask and armor. 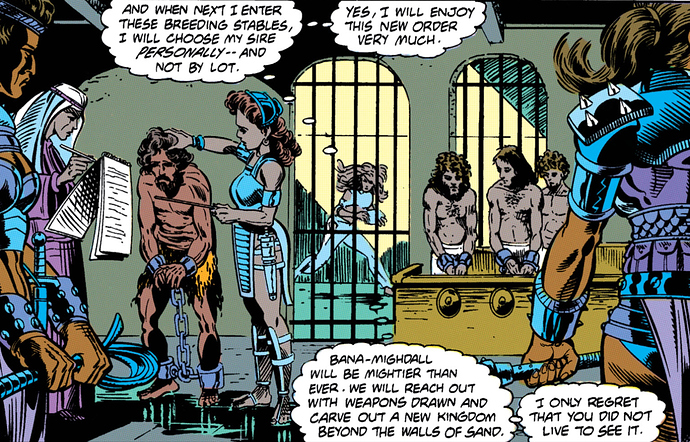 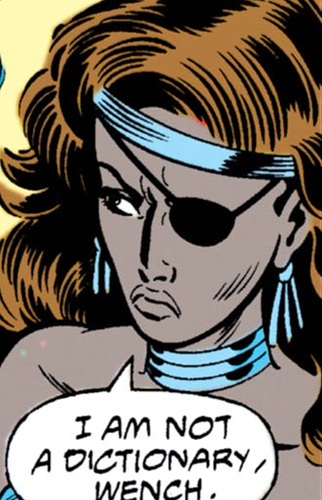 We see more of Diana and Hippolyta’s relationship in issue #32. What are your thoughts on this portrayal of their mother/daughter relationship?
I agree with @BigGLfan about the various parental emotions, both in the present as well as in the telling of the memory. I got the impression it was Diana’s first hunting trip. I could have sworn i saw the words “of age”. unless it was more about aging into the ceremony/ritual vs regular hunting for daily sustenance.

We also learn more about Egyptian Amazons and the secrets surrounding them. Are you enjoying them in this story as antagonists? Do you feel they truly enrich the mythology of Wonder Woman?
I am not sure if exploring an amazon splinter group occurred before Perez, but i do recall a group of Amazons choosing not to join Hippolyte when they settled Themyscira. I do like that we find out about their fate. Firstly, that they lost their immortality and consequently, how they repopulate their ranks. How they chose warfare as their chief export to support themselves.

I liked the tension when Nehebka (sp?!) was telling her story and Diana shares what she knows of the same event.

The name Faruka sounds familiar. I could either be mistaken or it’s something not related to Wonder Woman, DC, et al

The name Faruka sounds familiar. I could either be mistaken or it’s something not related to Wonder Woman, DC, et al

You’re probably remembering Faruka from the Rebirth arc where she was the Queen of the Bana-Mighdall. 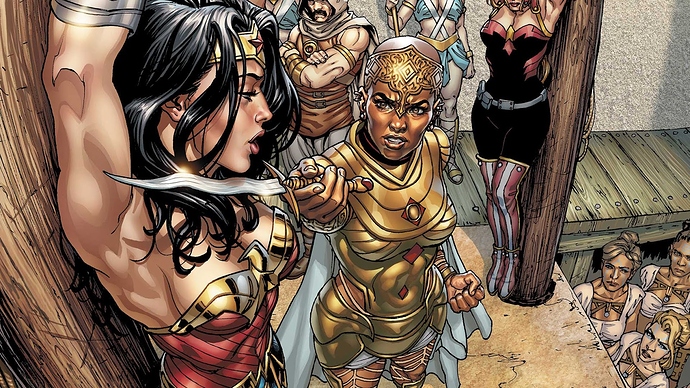 I believe this arc is where I last left off with the Perez run. I really need to get to reading the rest of it.

Sounds like a perfect time to jump back into it!

Faruka from the Rebirth arc

That is likely it. Faruka is the eyepatch and not a dictionary, yes?