What I love about them is, in my opinion they invented a fist bump! 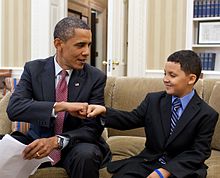 A fist bump (also known as a bro fist, power five, tater, PIB (as in pound it, bro), knucks, or pibbys) is a gesture similar in meaning to a handshake or high five. A fist bump can also be a symbol of giving respect or approval, as well as companionship between two people. It can be followed by various other hand and body gestures (such as immediately opening the palm and spreading the fingers for “knucks with explosions”) and may be part of a dap greeting. It is commonly used in basebal A f...

I had no idea! I love that y’all bring in so much knowledge of these character’s histories. Thanks for that!

Huh, may I ask how come?

I really dislike her, but I better not go into the whys because a lot of people on here just love Smallville Lois. I’m too exhausted from March to have people coming for me

I’d probably put her second only to Amy Adams.

I love Amy Adams. Her Lois was really strong in MoS and good in BvS. I hope we get to see her in the role again. I love most other live-action Loisis? Loisi? Loises? Lois’s? Recent TV ones have just not been my cup-o-tea.

And yes, I agree more recent TV versions are lacking…something. And I would love to see more of Amy Adams’s take on the character.

Loisi it is! I have heard Amy Adams say that she’d be happy to return to the role and she’s still pretty close friends with Gal Gadot. Would be nice if she showed up in a future Wonder Woman movie.

The rest of the reading is posted as the first comment! I was trying my hand at an April Fools yolk

Omg, get out of my head!

Lois and Diana always make me happy—would love to see those two team up on the big screen.

I really dislike her, but I better not go into the whys

Can you be constructive about it?

Also, i think the plural of Lois is Loii.

The closest Diana and Lois moment we have was in the Reign of the Supermen. Diana is in civvies, but still.

There was also the issue of WW in Phil Jimenez’s run where Lois follows her around and interviews her for a story. Great issue.

I’d edit to rephrase it as “the closest Diana and Lois moment ^I can think of^…”, but this should suffice.

Wonder Woman 75th Anniversary Special (2016-) #1 DC Universe
I enjoyed this interview as well (toward the end of the book.) …And when they see each other again in the Rebirth Trinity series. Also nice moments.

Is this your introduction to the Wonder Twins or had you discovered them before?
As previously stated, I am a Superfriends kid.

What do you most like about the dynamic between Zan and Jayna?
I liked that they didn’t snipe at each other. they approached most things as a team or unit.

Was anything in this issue truly unexpected as the description of the issue said?
Batman smiled a lot more than usual.
Thunder lust?
I’m not so keen on Zan’s face.

Are you looking forward to World of Wonder reading more Wonder Comics?
A change of pace shouldn’t kill anybody (because if that’s the case, I want to watch). On the other hand, i could also give a very caustic troll-like response about maintaining the integrity of the Wonder in the World of Wonder and that the only Wonder this World should be concerning itself about is the Wonder that is Wonder Woman and this troll is not going to stand around and participate in activities where our Wonder is so loosely interpreted…

Knowing the twins does help, but this book definitely answers the question we as fans hear most, “why do you like comic books?” and my first response is always, “because they are fun.” Even the art lent itself to the humor and lighthearted-ness. This filthy troll would not be opposed to more, including and not limited to:

I liked that they didn’t snipe at each other. they approached most things as a team or unit.

I liked that too. You see their sibling rivalry in things like the race to school, but when it matters, they are there for one another. Really sweet dynamic.

And his writing skills!

Yeah, I had no idea that was a thing. I was caught off guard by that.

On the other hand, i could also give a very caustic troll-like response about maintaining the integrity of the Wonder in the World of Wonder and that the only Wonder this World should be concerning itself about is the Wonder that is Wonder Woman and this troll is not going to stand around and participate in activities where our Wonder is so loosely interpreted…

I am intrigued that it’s Christian Bale in that gif

@nu52 didn’t give us the Wonder we expected this week, she gave us the Wonder we needed.
I love this book. It starts with the uber talented Mark Russell. If you haven’t read Flintsones yet, stop what you’re reading and move forthwith. It is that good. And Stephen Byrne’s art is perfect. It’s clean, crisp and easily carries the humor of the book. Course, I know the Wonder Twins from Saturday morning cartoons. Russell does a very nice job with the relationship between Jayna and Zan. There’s some gentle teasing between the two, but you know nothing would come between them. I also really enjoyed the Superman, Wonder Woman and Batman’s conversation about the Wonder Twins. And, who wouldn’t want the nickname “Thunder Lust” in high school? Okay, probably everybody. 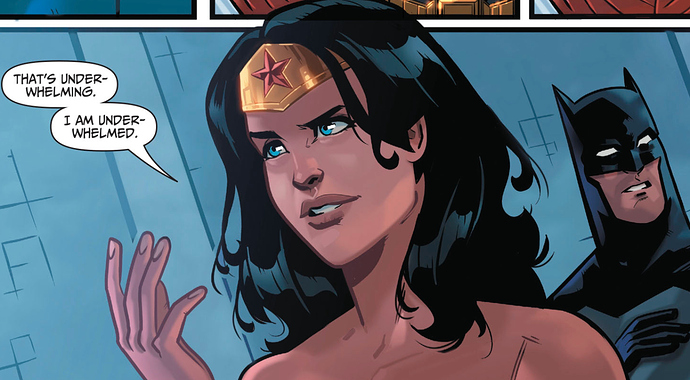 image1536×651 788 KB
The line about “how your ancestors have embarrassed you” is hilarious. But, I’ve had Pomme Frits in the Netherlands and Germany and it is great with mayonnaise (their mayo is a little different from ours, touch more vinegar I think)
As for should we be reading more Wonder Comics, if you lead, I’ll follow.
3 Likes
AntLeon April 3, 2020, 10:08pm #35

the mayonnaise on french fries isn’t as disgusting as it sounds. I suspect Miracle Whip might even be a touch better. Just to put an American spin and perhaps steal it as if we can up with it in the first place

I see an edit occurred without my knowledge. MW is a touch more vinegar-y than your average mayo, so i think my instincts kind of track.

And there fries are bigger and thicker, and hot out of the fryer.

Not wedge shape though. Say, shaped like a Wendy’s fry but supersized.

I think i understand. And i am always game to try because i have a foodie mentality even though i do not identify as one.