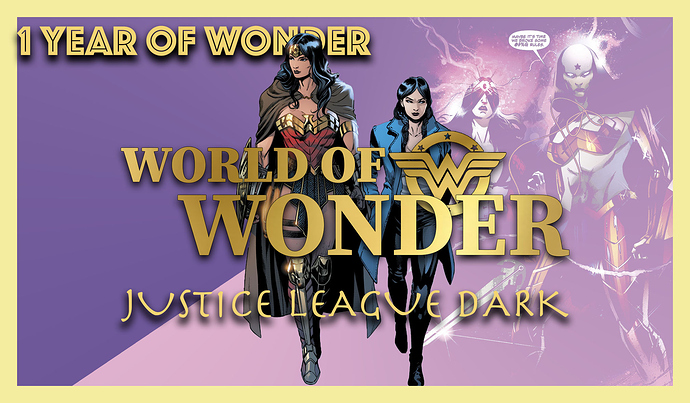 World of Wonder continues to celebrate 1 Year of Wonder ! Join us as we continue to explore the world of Justice League Dark.

I have not read any of this run of JLD but I think I can catch up pretty fast. I have continued reading the issues of Wonder Woman after last week’s introduction to mod Diana Prince and have been enjoying where that story is going.

Yeah, the JLD issues aren’t that long. Let us know what you think of the Witching Hour when you get to it.

The mod Diana Prince story was pretty fun. The art is well preserved too. Really great colors. Maybe we’ll revisit that run if you say it continues to be enjoyable.

I’m really glad someone figured that Wonder Woman needed to lead some team, some where. When I saw that it was JLD, I though “huh” but really quickly you realize she’s perfect for the team.

First, I am woefully behind.

Second, i thought this team was weirdly put together, mostly Manbat, but it definitely works. The team has gelled well. Manbat’s contribution using magic was well played. Bobo has grown on me; as a magical creature, he makes a lot of sense. And he drinks bourbon (or so sayeth my head canon).

Third, actually i got nothing; i just wanted a third to give this post more weight

I know, Manbat, or Man-Bat for originalists, does not belong on this team but we’re so lucky he’s on it. Nice outside the box thinking Ant-Leon.

Yup, I always thought Wonder Woman should lead a team. I like seeing her as the leader of the Justice League (one of the aspects I truly enjoyed of the JL movie), but fans will always prefer Batman or Superman heading that title. It’s cool seeing her lead the DC Super Hero Girls and if they made a version of Wonder Woman leading an all female hero team, I’d be so down for that.

JLD wasn’t something I ever really thought about Wonder Woman leading until the JLD animated film came out. It made no sense to me for Batman to be there, and there was even a scene where Wonder Woman showcased her magical knowledge. That’s when I was like, “Wait a minute.” So, when this title came out with Diana at the center and it got some backlash for it, I thought it made sense. She was created through magical means, her villains tend to be magical (Circe, Faust, etc.) and her weapons are magical. Many of her supporting characters are magical. I was sold right off the bat (Man-Bat in this is adorable as heck and needed to be on the team).

First, I am woefully behind.

Don’t fret. The topics will be there when you’re ready.

You’re right though. The team’s personalities really work well together.

I only read a couple of the comic “news” websites for announcements and stuff, so didn’t know there was backlash. Which problems means a handful of loud obnoxious people on the internet. For the most part, I think that stuff is over covered. If you believed the press about people being upset Captain Marvel would have made no money (I thought it was okay, but kinda dull and disjointed). Anyway, if you don’t like Wondy on JLD go fly a kite. And I stand by that.

I don’t read comic gossip websites. It was mostly on social media sites. It wasn’t even just one or two sites, but across the board. Even on certain sites where you can readcomics and they have comments sections (which I have never visited ever especially not before DCU existed). People really weren’t having it, but it died down because the book is just too good to deny.

It’s beyond me why anyone would waste their time commenting about how horrible something is. Just don’t read it, but that’s me. Anyway, Go Wonder Woman!

I know; it’s currently part of my report this week while we are “live”. It also reminds me to be aware of possible spoilage.

Nice outside the box thinking

Truthfully, I just rolled with it as i followed the weekly selections. And liking Bobo was another unintended consequence.

I’ve really liked seeing them explore the nature and mechanics of magic and how it works in this universe, and seeing things thrown, erm, upside down. Diana and Zatanna as the agents of chaos was really fun, especially Bald Punk Diana (who knew she had a look like that before Death Metal?) and Zatanna no longer being confined by speaking words exactly backwards.

Hmm…Man-Bat was a character that I was kind of take or leave before. He’s in the past been one of those characters where you basically just get the same exact story over and over again. I like how Tynion and crew kept what was cool about him before but let him evolve into something more – I don’t think it’s nearly as effective as Clayface’s back in his Detective run, but still damn fun.

As interesting as they are, I really want to see the team fight more than just the mechnizations of the Upside Down Man. I get that this was a theme that the JL books were doing at the time – JL with the Legion of Doom and Odyssey with the Ghost Sector – but I’m ready to see them tackle different threats.

Hmm…I think I want to see more of Swamp Thing interacting with the team in general, because it feels like he’s kind of outside the team still. Hell, he’s interacted more with John than any of the other members.

JLD wasn’t something I ever really thought about Wonder Woman leading until the JLD animated film came out. It made no sense to me for Batman to be there, and there was even a scene where Wonder Woman showcased her magical knowledge.

I get what you’re saying, though in the movie’s defense, I thought they handled it very well. I think his lack of magic skills work with the team dynamic, because it gives them a different perspective, and it creates a natural way to explain the magical dynamics of things for the audience. And thankfully Batman doesn’t steal the show or take away from the other characters – like, I honestly kind of forget sometimes that he’s in the movie!

So, when this title came out with Diana at the center and it got some backlash for it, I thought it made sense.

It does, though I could understand at least some of the initial worries.

For one thing, I think the omission of John and Deadman ruffled fans of the original series. In a lot of ways them along with Zatanna sort of became the “trinity” of the JLD, and not having those three together felt as wrong as not having Batman, Superman and Wonder Woman on the JL.

And another, the JLD team was, well, darker than the standard superhero teams. They got a little dirtier and were more morally grey. So the idea of putting in a true blue superhero like Wonder Woman made people think the book was going to fundamentally change. And I think it worked because the book directly addressed it and showed how she changes the dynamic, but how she still fits with the group. 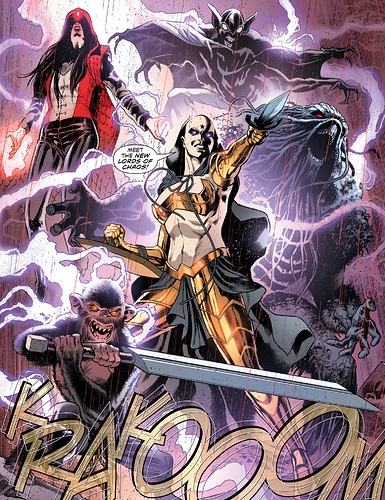 image1536×1992 4.16 MB
Angry monkeys are scary
Very much enjoyed this JLD arc, though like @Jay_Kay I’d like to see the team move on to other types of threats. The standout elements for me were the emotional toll this fight took on some of heroes and the different type of leadership our favorite Amazon exhibits from that we normally see in JL books.
The loss of the magic lands hits Blue Devil and Detective Chimp particularly hard. Devil feels the personnel grief of seeing these people that he’s protected and he loves wiped from existence. You can feel how visceral his pain as as they simply disintegrate. Bobo’s pain comes from feeling his will never measure up to the burden Nightmaster placed on him when he handed on his sword.
I’ve also enjoyed Khalid Nassour as he tried to regain Fate’s helmet. I really hadn’t seen him as Fate much so didn’t have an opinion one way or another. I think it makes sense for someone of Egyptian heritage to be Fate considering his origin and so far I like Khalid. Kid did good.
On Wondy. She shows a very inclusive style of leadership. At times, Zatanna steps forward and seems like a co-leader. At other times Diana gives other members the chance to shine without being directed like they would if Bats were in charge.

Huh, may have to check out this television thing.

Speaking of, I loved the crazy chaos designs for the characters, especially Diana’s. 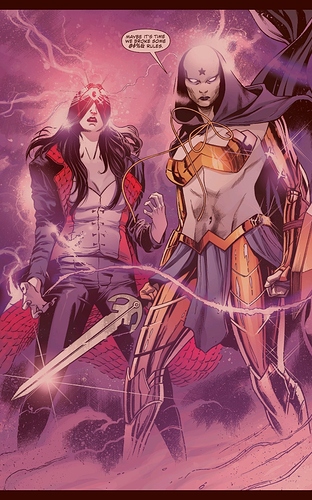 It’s so NOT HER and yet…HER, you know?

Also, it’s fun to hear Diana swear, because I can’t think of any instance other than the animated WW movie.