This thread is completely dedicated to Young Justice: Outsiders’s Barbara Gordon aka: Oracle. I want to talk with you guys about what your expecting, or are excited about. How do you think that they will paralyze Babs? Do you want them to play out Killing Joke or do something new? Do you want Dick and Babs to have a relationship?

I want all of these things, but what about you? Let me know! 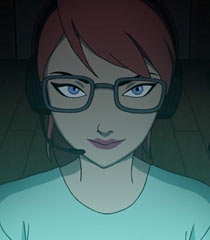 I think that Dick and Babs SHOULD have a relationship and Babara’s paralyzment probably should follow whichever backstory it followed.

I feel that this version of Dick is significantly older than Babs.

Yeah I feel like this version of Babs was a little closer to Tim than Dick. I wanna see if they play with Stephanie Brown and Tim’s relationship too.

But I do like the idea of Oracle being the new “guy in the chair” for the team instead of Batman or Nightwing.

To Redhood.55520:
I thought that at first too, but she is actually a year older than him. You can also see they have a on and off in the YJ season two prequel series. She just joined the hero gang after him

I didn’t know they confirmed babs was going to be paralyzed for oracle. It sounds really morbid, but I do hope she is just because she was one of DC’s only Wheelchair using superheroes.

For how they will paralyze her if they do, I hope it’s not in a killing joke thing. I hope it’s part of her story or something in which she has agency, rather than being to make her dad and batman have a sad.

Thanks for letting me know I’m not alone wanting all of this stuff for the amazing Barbara Gordon. #dickbabs

I want to see Barbara being a leader. She was supposed to be in charge of the team after Nightwing left, which is why I’m sad they’re doing another time jump and skipping over that. I really wanted to see more of Batgirl Babs. We only got a small dose of her in season two. My favorite season two episode is when Batgirl was the leader of the all-female team.

I do also wants Babs and Dick to be involved romantically. They’re so iconic and I feel like the show has been hinting at them becoming a couple since season one when they went to school together.

It would be nice to see Barbara interact with Dinah Lance/Black Canary. Wouldn’t it be awesome to see the Birds of Prey forming on the show? Maybe introduce Huntress? Now that Katana is in the show, maybe have her interact with Barbara and Dinah too.

As for how Oracle would get paralyzed, I hope it’s not like the Killing Joke. I don’t like what that story for Barbara. If they come up with a different backstory for her, I’d appreciate that. I also don’t like the Young Justice version of Joker, so having him tied to Barbara’s story would not be something I want to see. Joker already has the Jason Todd story, we don’t need to see him do that Barbara.

Just a few days left!!! The #dickbabs suspense is killing me! I can’t wait for Oracle!!!

I’d like them to stick with the killing joke theme, although it’s hard to watch & usually nothing upsets me. I hope it’s just mentioned & not shown if they go that route tho. Hands off my Babs & I can’t wait to see her in action.

are they releasing 3 episodes at a time? or is that only a one time thing because when i checked yesterday it said the first 3 episodes would be unlocked in the next couple of days

To @SMELIO55
Yes, they are releasing them three at a time:)

I just finished Part One of the prequel comic, and it lead me to this question. If they’re not going with the Killing Joke, could Psimon cripple Babs? It’s a theory right?

@RollingThunder06, I hope you can join the Watch-Along on Friday night, so we can geek out together over whatever may pass for Babs in real time!

To @Applejack
Nothing would make me happier:) It will most likely be my second watch though!

Just read Part 2 of the prequel, and it was pretty good! Super excited about tomorrow!!!}

She should get paralyzed during a mission but it should be done by the Joker, kind of a nod and wink to The Killing Joke but not the same way or circumstances.