What are your opinions on the final three episodes of YJ: Outsiders?
Particularly on the final episode(?)
I made this post cause I came in looking for a post like this but found none.
Alas, what did you think? 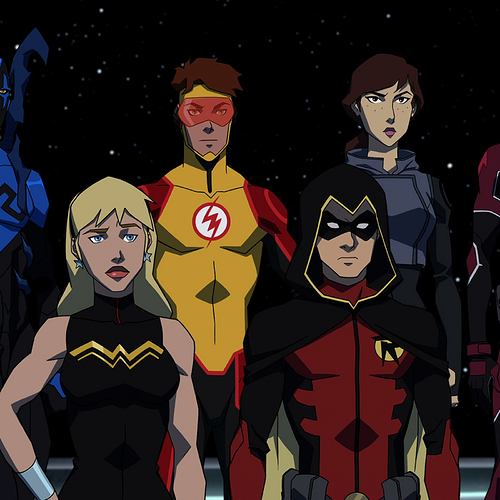 What does the ring mean???

The ring is from the Legion of Superheroes. A group of young heroes from the 31st century who have had multiple adventures with heroes like Superman, Supergirl, Impulse, and Superboy and is currently the prevailing theory for how Wally might come back from the dead, given that they saved both Superboy and Bart Allen from their respective deaths in the comics.

I’m also pleasantly surprised Terra DIDN’T betray the team this time. I suppose next season will give her character a chance to better develop. A shame Geoforce is now technically a bad guy this time around? I suppose neutral at the very least? I’m surprised everyone’s talking about the ring, but not about everything else.

What did you all think about Zatanna and M’gann tricking Artemis with the dream/mind playground in order for her to get closure? Does it prove Deathstroke right about superhero’s constantly betraying each other? Brion was manipulated by the advisor, but Zee and M’gann were not

What did you all think about Zatanna and M’gann tricking Artemis with the dream/mind playground in order for her to get closure? Does it prove Deathstroke right about superhero’s constantly betraying each other? Brion was manipulated by the advisor, but Zee and M’gann were not

Given Artemis’s ultimatum that if Zatanna didn’t do this then she’d go to someone like Wotan, it was no betrayal. Better this than her making a deal with a devil.

WALLY STILL HAS A CHANCE! NEXT SEASON LETS GO!

WALLY STILL HAS A CHANCE! NEXT SEASON LETS GO!

So, first thing is who is Michel Lyman?

Second thing, man it felt good having Lex just whole situation backfiring on him completely. Light actually felt on the back foot this entire season honestly. Second do I felt some genuine paternity from Metron to Halo and Violet?

Second the ending the Markovia Siblings is depressing, but I dunno it felt good. Almost like it what should happen, or more accurately, I felt all 3 siblings atleast are safe for what are degrees of safe.

And Gregor Loyalists won’t be seeing a firing Squad. Two I love the reveal of “we knew”. I also am uncertain who I felt who the Apocalitic (spelling) plot was wrap up. It felt too easy almost like a bow on top. But on other hand it felt perfect.

Now here is my larger feeling, I felt we had 2 finale’s and S4 episode 1. The first finale dealt with our larger meta plot if we were a traditional MCU or even DCAU again. This was first episode of the 3. Granny standing in for Darkseid or a Thanos style character obviously. This was one (first of the trilogy) the episode if I didn’t like S4, I could say you could end the show and go out on a high note. Questions left to be answered obviously, but you feel fulfilled even if 4-5 years later you’ll still ask “how about Markovia, did Artemis move on and get with Will?”

That is what the second and third episodes handle. Rather beautifully, while giving us a conclusion, it’s not a statisfying one like the first episode was. Instead they don’t just tease, they blow it up and show us the truth and more.

This is the Young Justice Ending and the DC ending (more on that later), we have the covert OPs back in play. The mission to Markovia is a classic Team Mission. And parallel or concluding the story line setup by Brion in contrast to Superboy.

Both Brion and Superboy step into the light. Brion becoming its Thrall, and Superboy by “embracing” it. Now there are two lights here. Light of “Evil” and the Light of “Truth”. Light organization, blinds the world from the truth with its light. While “Truth” is what setup up the Team and their allies greatest victory. Taking down Lex for example involved stepping into the Light.

The second thing here, Brion and Superboy parallel here. Brion let himself become blinded and kill his Uncle in a rage. While Superboy coming into the light finally allowed him to take down Lex Luthor WITHOUT killing him. This was a Young Justice ending, as it showed all the teams; Inc, The Team, Night Team, Outsiders and the Justice League, all working together under full knowledge of each other to win. And take down the enemy.

In contrast here, the Light employment of 7 individual organizations whom have no shared knowledge of one another. Cost them win after win after win.

And group cohesion. Had us let say, we had no just Vertigo but Queen’s Bee Henchpeople, and/or Luthor Infinity Team alongside the Markovian Meta’s. Team Beta might been delayed longer, Terra would not been told that they knew, and she would have killed the Uncle.

This is a YJ ending because it’s something we saw in YJ S1 ending and YJ S2 ending, heroes win and more is based on faith in each other, faith in the truth, and faith in humanity. As Wally said “it’s his world too.” (In regards to trusting Lex).

Why is this a DC Ending? Well because it’s not just asking the hard questions (Meta’s as persecuted minorities and the fact Meta’s superhuman abilities are dangerous), because it like YJ ending, tells you to believe. And tells you to act.

Conor and Clark both on the podium as brothers is the single strongest scene for me. For Conor it would been better for him to stay shadow’d. But stood on that stage and showed himself worthy of that S he wears. Because he isn’t just Conor Kent codename Superboy. He is a Genomorph, born and raised. He needed to show that. Not for himself but for that Dubilex and his fellow brothers.

Then Clark who initially rejected Conor back in S1 and as we saw in S2 grew and saw him as a brother. Stood on that stage proudly. And in no uncertain terms told everyone, he might have another parent (Lex) but he is still his brother and family. Look this is gotten wordy and maybe non-sensical. And the Marvel vs DC comparison, was weird. But just to compare End Game, rather somber ending. The focus was on family, and that to make a comparison.

The sun will shine again.

I would like to thank death battle for explaining the end credits. Without their lobo vs ghost rider video I would not have figured out that the baby spawned from the blood he spilled way back when. Also anyone else get a fallout 4 wrap up feeling from this?

Thanks DC Comics for making my dreams of season 3 of Young Justice come true! What a great ending! Cmon season 4!

While I think the show stumbled somewhat at the beginning of the second half of the season, the last 5 episodes really hit their stride quick thoughts
-Geo turning was a logical well done twist
-Legion!!!
-BL in charge, heroes honest with public/each other right way to go
-Lobo lol

Yup I really hope that he is stuck in the speedforce and not actually dead .